The COVID-19 crisis has hit the luxury and fashion industry hard. According to a recent report from Boston Consulting Group, sales in these two sectors could drop this year by 25 percent to 30 percent compared to 2019, while Brand Finance estimates that global companies could lose up to $1 trillion in “brand value” (i.e., “the value of a company’s trademark and associated marketing intellectual property within the branded business,” including other intangible assets) in 2020, alone. Beyond the immediate impact on brands’ operations and their bottom lines, the economic and health crisis is also expected to have long-term repercussions on purchasing behavior, and trigger tremendous changes in the luxury segment, upon thefashionlaw.com.

Laudably, the industry’s biggest names luxury houses have reallocated their production tools to produce hydroalcoholic gels and manufacture face masks and lab coats. Many of these same conglomerates, such as LVMH Moët Hennessy Louis Vuitton, Kering, and Prada Group, for instance, have decided to provide financial support to health services and to their employees. Some companies, such as Hermès, have proposed a reduction in the dividend paid to shareholders and no raise in management remuneration.

Beyond these immediate measures, luxury goods companies have no choice but to rethink their strategies in order to weather a more severe crisis for the sector than the financial crisis of 2007. According to Javier Seara of the Boston Consulting Group, luxury goods sales could plunge by 65 percent to 80 percent this spring and early summer compared to 2019 before rebounding at the end of the year. The impact will not be the same in all countries, according to the U.S. advisory firm: in Western Europe, the sector’s sales could fall by as much as an estimated 40 percent; in Northern Europe, up to 38 percent, in North America between 23 and 34 percent, and in China from 24 percent to 30 percent.

The drop in sales is correlated with the difficulty brands are experiencing in moving merchandise, namely, their Spring/Summer 2020 collections, as stores remain closed in many parts of the world, and as consumers drastically pivot away from non-essential shopping.

In China, where stores are in the process of reopening, some luxury brands were able to recoup some of their losses by way of online sales, but not all firms have deployed an omnichannel strategy or have been able to ensure deliveries. Meanwhile, in Europe, where the lockdown came later, the end of Chinese tourism and the closing of stores small and large, as well as department stores, is expected to have disastrous effects on end-of-year inventory levels and on income. Still yet, in the United States, the same trend is looming and several historic players, including Neiman Marcus and J. Crew, have already filed for bankruptcy, with no shortage of other major names expected to follow.

In addition to an expected consolidation and clearing out of struggling brands, namely by way of the enduring string of bankruptcy filings, other significant changes are expected to occur within the fashion and luxury spaces. These are five key trends that we can expect …

1. A ramping up of digitalization

To dispose of their inventories during the closure of their stores, luxury houses will strive to offer an online service with a first-class customer experience. It should be a flawless process from the product offering through to the secured payment and timely delivery. Luxury groups will have to attract many more customers (at least temporarily) to their digital platforms and create a new customer journey.

In the short term, fashion and luxury names are expected to collaborate with third-party retailers, whether it be retailers like Farfetch or resale/off-price players, such as The RealReal or the likes of T.J. Maxx, to off-load mounds of unsold products. Beyond that, though, they will have to roll out their own online sales channels, if no such channels exist, to fully control the customer experience and preserve their brand image.

This will involve initiatives, such as the creation of virtual stores or ephemeral “pop-up shops,” as some brands have already done on WeChat.

Before the Covid-19 crisis, consulting firms BCG and Altagamma predicted that the second-hand market, estimated at 22 billion euros in 2018, would grow by 12 percent by 2021. The emergence of ethical and ecological considerations among consumers is thus a favorable prospect for sites, such as Paris-based Vestiaire Collective and San Francisco-headquartered The RealReal. In difficult times, customers may turn even more to these second-hand goods. Consumers with luxury items and in need of cash will offer their items for sale, thus, expanding supply, albeit at lower prices, which could, in turn, stimulate demand. This trend is gaining momentum across the globe, even in Hong Kong.

3. A shift in consumer behavior toward more responsible luxury

On April 11, Hermès reopened its Guangzhou flagship store and reportedly generated $2.7 million in sales in a single day. Will the phenomenon of revenge spending observed in China spread to other countries? Or does it illustrate the attractiveness of Hermès in particular?

While it is too early to draw sweeping conclusions, the example is interesting. It can be seen as an aspiration for timeless luxury produced by one of the industry’s most esteemed houses. This trend was evident even before the start of the pandemic, in particular among millennials (those born between the early 1980s and the late 1990s): 64 percent indicated that would be influenced by sustainability in their buying behavior.

Still, many consumers will face a reduction in their financial resources and that could put a hold on their purchases. This situation may force luxury houses to reduce the number of collections and products offered each year. Consumers could even reconsider the concept of ownership and shift toward rental services.

4. A probable cut in communication and public relations budgets spending

In the current context, brands will have to reexamine the way they communicate. In particular, fashion weeks in their traditional format – and whose June editions have now been cancelled in Paris and Milan – must be revisited. They could be replaced by virtual experiences and more “private” events. In the coming months, the organization of large gatherings will, indeed, remain limited. Faced with the crisis, it is self-evident that luxury companies will have to restrict spending and that communication and events budgets will be the first to be impacted.

5. Consolidations in the luxury industry

With the financial difficulties, many players, and in particular the smallest, will become more-affordable targets. The most financially solid players such as LVMH, Kering or Chanel will no doubt have the option of buying out competitors, subcontractors and even suppliers, read the full article on thefashionlaw.com. 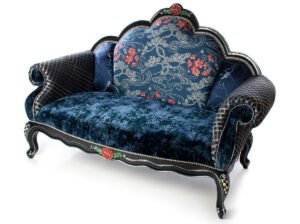